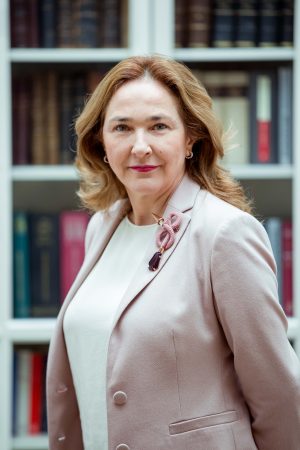 Lia Doru – Trandafir graduated from the University of Bucharest, School of Law, in 1988 and from the California State University in Public Affairs and Political Science. She served as counsel to Romania’s largest shipping firm before becoming one of Romania’s best known print and television journalists. She was selected to handle the successful political campaigns of Victor Ciorbea for Mayor of Bucharest, and Emil Constantinescu for President of Romania as spokesperson.

In December 1996, she was appointed State Counselor for Public Affairs to Prime Minister Victor Ciorbea where she coordinated government policy on a wide range of economic issues, including enterprise restructuring, reform, privatization and Romania’s relations with foreign governments, as well as non-governmental organizations, with duties similar to that of a Chief of Staff.

Mrs. Doru-Trandafir has represented a broad variety of Western firms, assisting them in resolving difficulties involving competitors, the media and various government agencies, and in establishing strategies to implement projects to ensure a “smooth” take over process with labor and the local community. She routinely conducts negotiations on behalf of clients in privatization transactions and mergers and acquisitions, with a particular expertise in real estate development.

Indeed, Mrs. Doru-Trandafir is unique among practitioners in combining the skills of public affairs counseling and transactional expertise in order to provide clients with efficient and successful representation in the transition from pre-investment to operational control.