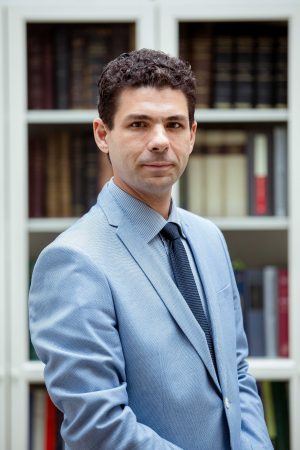 Antoniu Obancia graduated from the University of Bucharest in 1999, received a post-graduate diploma in white-collar in 2001 and a Doctor’s degree in Commercial Law, granted by the same university in 2014, with the thesis The legal effects of the insolvency procedure over the agreements concluded by the debtor undergoing the procedure.

Mr. Obancia worked for banks and other corporate clients, providing advice on a wide range of matters involving commercial transactions, assisting clients in establishing and developing their operations in Romania. He has a deep knowledge of the local business and legal environment, attention to details and the ability to draw up the synthesis out of a multidisciplinary project to elaborate the most suitable legal strategy. His expertise includes the insolvency and restructuring area of practice and he performs the activities that are specific to the profession of insolvency practitioners, according to the Emergency Government Ordinance No. 86/2006 regarding the organization of the activity of the insolvency practitioners.

He provides top qualified legal representation in the Romanian court system, as well as during hearings held by prosecution bodies, police units, including in cases that involve imprisonment before trial, using the most clever defence tactics. He also specializes in legal advice on the preventive side of the criminal law risks, including in antifraud and anticorruption trainings for the employees of corporate clients.

Mr. Obancia is author of several legal books as well as of many articles in specialised publications and is a renowned speaker at legal conferences.

Antoniu Obancia is member of the Bucharest Bar and of the Romanian Insolvency Practitioners Association (UNPIR). He practices in Romanian and English.