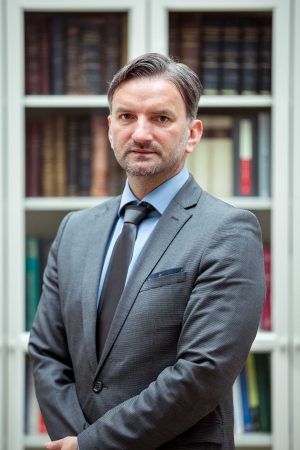 Tiberius Bărbăcioru is a graduate of the University of Law Bucharest and a former judge at Bucharest District 1 Court of Law and at the Bucharest Tribunal. Tiberius’ theoretical qualifications include various participations at training courses organized by the National Institute for Magistrates’ Training and Specialization, as well as his graduation from the courses organized by the International Institute for Human Rights „Rene Cassin”.  Tiberius also acted as university assistant within the criminal law department of the Law Faculty of „Nicolae Titulescu” University.

Since 2002, when he became a lawyer registered with the Bucharest Bar, Tiberius was involved in many complex economic criminal files, where his deep understanding of the local business environment, and his deep expertise in criminal law allowed him to develop and implement high-end defense techniques and strategies.

Tiberius is providing assistance and representation to clients before all layers of the Romanian courts of law, up to the High Court, but also before prosecution bodies and police units.

Tiberius was Romania’s representative at the International Congress of Magistrates from Europe. He is member of the Bucharest Bar and practices in English and French.